Even though big families are made up of individuals, each one as different from the other as in any other family or group, a big family has a certain persona, a collective personality about it that stands out in the characters they produce, and at home the appearance of functioning confusion. Concentrate this reality in to a small area comprising four large families, each with its own personality and you can understand the aura created by what we knew as "Vatican City". Fitted in to just two acres in the area known as 4 Mess, the four families were known affectionately as being able to field two football teams, the linesmen and referee, and enough spectators to make a nuts man rich ........Ha!Ha! .....great stuff and I hope that the following pictures and collection of memories will bring back for you your own set of memories of this wonderful place and the characters that made it what it was. I hope that you too will taste the salt of happy tears running down your cheeks as you surf this new part of our PaP site. 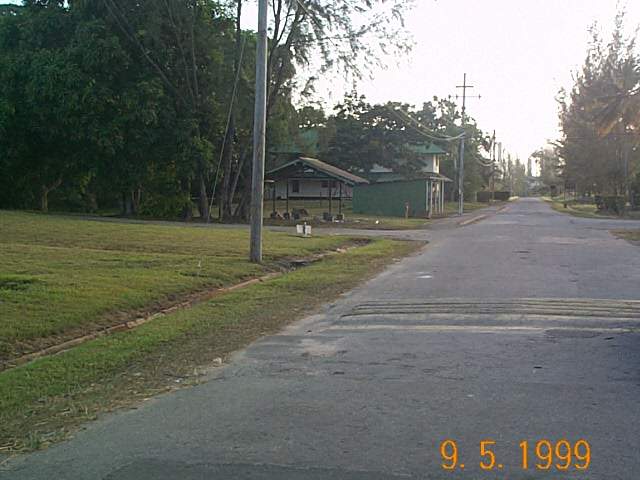 I have chosen this picture as the introductory shot on this Index page that leads to the other pages in this series because it is laden with memories for me, and covers a number of important Vatican City icons.

The road through the Vatican was the road we would drive along in our red buses on the way to school in the morning, and back again in the evening....... two completely different sets of feelings. There was a sense of celebration on the trip home in the evening and the road pictured was the final piece.....the stretch where Yarrily Kublha Khan would double clutch the bus in to second gear to slow it as we raced home. This would elicit loud cheers and applause from the boys on the bus.....a statement of budding manhood......God alone knows what the residents of the Vatican thought about this whole thing.

It was also the road along which we boarders went home on Friday evenings and back to Boarding House on Sundays. As much as I enjoyed the Boarding House once I got established near the top of the cruel pecking order, there was no place like home.

Later on when we moved from Brighton to Bay Avenue it was the road along which myself and Arthur "The Squire' Patchett launched many outdoor adventures with Copper Ironside.

Even later when the whole world was changing and the music and peace revolution was sweeping the world, giving us a chance to be part of something larger than just Trinidad, it was here in the Vatican that I met up with some of PaP's gentle people for a short time, and grappled with whether I should remain a thug or enjoy the nicer and more peaceful side of life. Hi! Mavies, Stephen, Brenda, and Diana......still remember it like it was yesterday.....the ability to talk openly about things and feelings that I could not normally, to be able to be friends and look beyond the acknowledged differences that separated some of us; to dream about a life without ambition and goals, of singing and playing the guitar and joining in the revolution; the part that music played and the ability to draw the music and its meaning in through every pore and become part of it harmlessly......black lights, air conditioning, clay blocks, eight track player, and a bed on the floor, super wall posters, Simon and Garfunkle, the Seekers, Mamas and Pappas and lots of others....too many to note here.

It was the home of Uncle Hector Protector, Uncle Clatter, Jimmy the Juice and Mr.Davenport.

It was here where I had my first real kiss with a super young lady.

People have come to see what the Vatican is doing in PaP since 1st August 2001.
FastCounter by bCentral