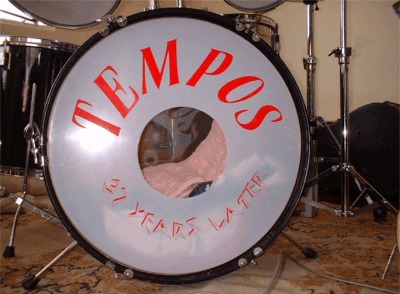 In the mid-sixties (1963 - 1965), after the first PaP band The Young Ones had already folded, Sid Johnson, and Johnny Springer who transitioned from the Young Ones, joined forces with Stan Soodeen, Hugh Robertson, and Frank Hinkson to start playing together as the Tempos. Stan, Hugh and Frank had been playing together down in the fields.

Sid's band diary kept alive over the three years that the band was together, reveals a group that played all over Trinidad and played in response to any of the excuses that we continue to find to have a bram. They must have been good, they played at some notable weddings and at some pretty high falutin' fetes, they also knew how to get down and fete dong the place.

As fate would have it, and really in keeping with the way things happened at Pointe-a-Pierre, people moved on, went away, fell victim to the demands of the oil industry that they worked in, and the band came apart in 1965.

On Sunday 13th October 2002, some 37 year later, the band got together again, minus some players who are overseas, and sadly some who are not with us any more.........those who have gone ahead of the rest of us to start-up the new PaP, and the hope is that the following pages will show you what a wonderful day it turned out to be, and just how much the spirit and memories of PaP are still alive and strong.

We hope that surfing these pages will help you feel what we felt, and that you will become a part of the band reunion for a short while.

Click on the picture of the base drum above that was so thoughtfully and nicely decorated by Trevor Pollonais to see the pictures of the band at play.

On the left in the picture below is Hugh Robertson (one of the original Tempos members) whose visit to Trinidad sparked the whole thing. On the right is Sid Johnson who put the reunion together. Without these two it would never have happened, it was their day for sure....thanks guys!!

Click on the pic below to see the people of the reunion in action. 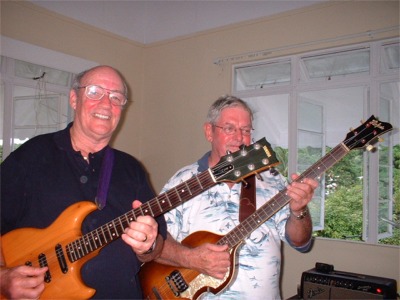 The present is without dimension if the past is ignored, and Sid was able to get a few of the old band shots blown up and posted on the wall to show where the band had come from 37 years before. It also helped us to guess what waist size they wore back then versus the one we saw on Sunday.

Click on the pic below to see the people of the reunion. 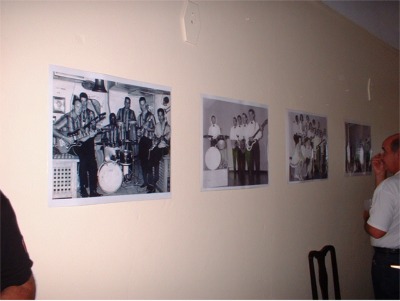