When Ian Aleaxander so kindly and thoughtfully sent in this pic as being Bill Ledeatt, Allison Taylor and John Springer sitting on PE1912 (ultimately my Austin Healey Sprite), it took a while before it sunk in that Bill had it before me....I sure didn't remember that at the time. Immediately as I saw the pic though, it was like seeing an old friend for the first time in a long time and the sound of the engine (Burgess muffler) immediately caressed my memories and the smell of the Castrol X engine oil came back to me as if the car was sitting idling in the garage......just longing to be taken for a fast drive....maaaan! those were great times and as the first car that I owned, PE 1912 was one of the growing-up frontiers that I benefited from even up to now....Thanks Ian....this pic sure woke up a great part of my good-memories bank. 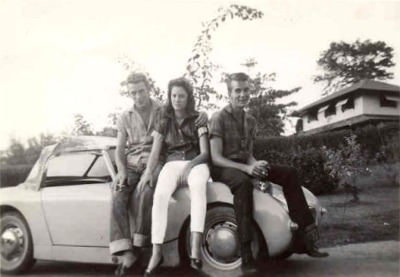 When Ian followed up with the pic below with the number PE1912 staring me straight in the face it was nearly to much....what a rush!! Parked next to it is John's light blue Sprite that I also remember well. Sitting on John's car is Christine Alexander. If these cars were still alive today they would be about 46 years old. I have retouched this pic as best I could to try to bring out the Twilite Drive-In sign at rear right of the pic without loosing too much quality.....hope that I hit the right balance....thanks Ian...great stuff...had me going for quite a while. To see more of Ian's pics scroll down to the two buttons below. 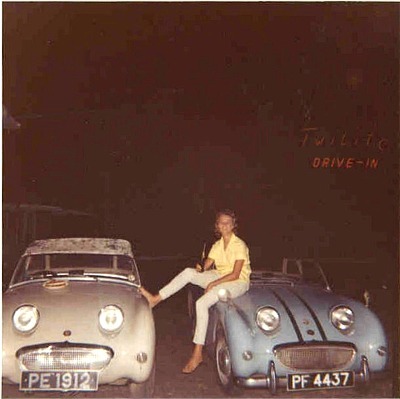 MEET THE ALEXANDER'S FRIENDS AT SCHOOL AND AT PLAY.