NEW POINTE-A-PIERRE.
For those who haven't seen it in a long time.

After the PaP Club, the various "Bus Shelters" have been the most talked about and reminisced part of our past PaP life. It seems that everyone has a nostalgic memory of "their avenue's" bus shelter, and the following five pictures are an attempt to jog your memory banks, and for a short while let you sit in your bus shelter doing what you enjoyed the most. I've had many tales of secret telling, first "hold hand", smoking, plotting and planning, going for walks with the maids, last minute homework and cramming, sitting innocently looking out for the current secret heartthrob, next two steps after "hand holding", and many other things that people did and should not have been able to do privately considering how open these little 10' x 10' sheds are. In the bus shelters, we learned how to hold a cigarette behind the palm of the hand, wave the hand gently enough not to arouse suspicion but enough to disperse and hide the smoke. The critical time was always lighting-up....but we never seemed to have got caught.....almost as if the bus shelters protected us and in fact had walls that were invisible to us kids but opaque to adults. Enjoy these five......six more to come soon. 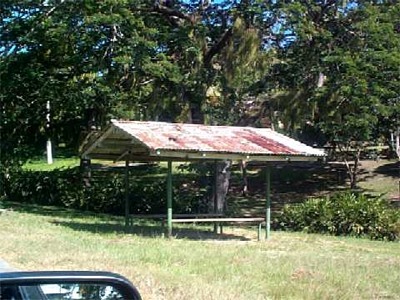 The Carib Valley bus shelter, sits sadly in beautiful surroundings. Obviously not used, it remembers a better time and hopes that someone will come and sit in it soon. 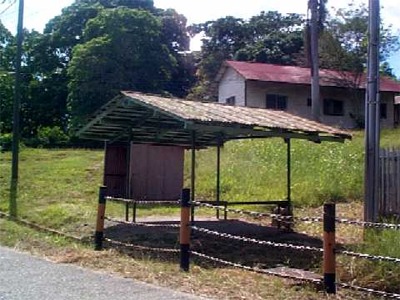 Seeing that there are no bungalows left in La Carriere, it is a safe bet that this one is not used. It has deteriorated over time but not been vandalised like some of the others. Behind it stands what is left of the Maingot's bungalow, and the shelter stands there wondering where everybody has gone. 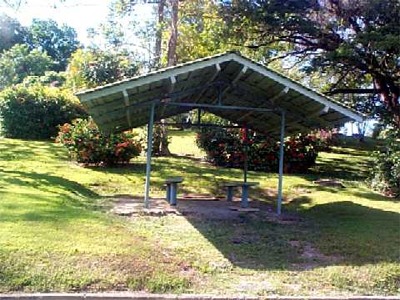 Well maintained, and possibly used and loved, the Bon Accord (spelling?) bus shelter nestles comfortably in to the side of this small well-kept rise just opposite to the entrance to Old School-House Lane. 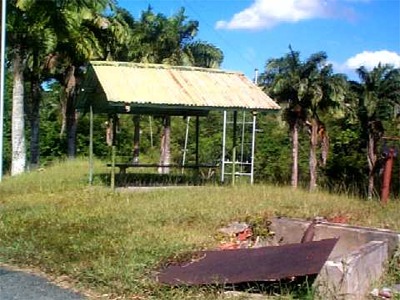 By contrast this one on Regent's Road droops sadly, having not seen hide nor hair of any red buses and happy kids for a long time. No one to share their secrets with. 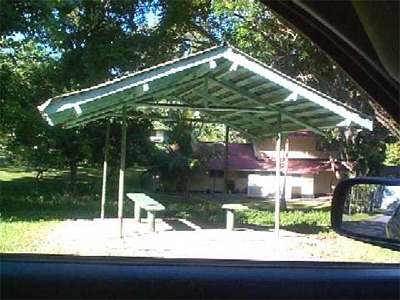 This another shot of Brian Alkin's bus shelter on Concord Road right opposite where the Bayley's and the Shepards used to live on Poui Ave. In the background is the bungalow where the Bartletts lived. Gail Bayley has since pointed out that the Williamsons used to live in the house behind "her" bus shelter, and that there was a big pomerack...huge pomerack tree that stood just behind the bus shelter in disputed territory.....man you should hear the legal jargon used to defend her fruit gathering sorties into various fruit trees that people felt were in their yards and Gail felt were in common or someone else's territory, since there were no fences in PaP. Glad she didn't like bay-tea.....I lived in Bay Avenue.....hmmmmmm!......might have met her earlier if she did, come to think of it.......cheers Gail - a long time ago.