To many, Carnival is just one big party, a time to enjoy yourself in ways that you could not at any other time of the year. But behind the partying lies a whole host of human things, a collection of activities, people, creativity and a dynamic that more than any other single event represents the soul of much of our country, a marriage of many of the elements of our rainbow tapestry. The following is a step by step attempt to capture the heart of the mas', the part that centers around Port-of-Spain and the celebration itself. It does not look at the more sober side of the period that is enjoyed and revered equally by the many who don't get swept away in the madness. Join us for a quick tour.

People have played mas' through this site.
FastCounter by bCentral

Links To Other Carnival Pages.

THE SOUL OF CARNIVAL The steelband more than any other provides the link between the roots and original meaning of carnival, and contemporary fete driven carnival. The "big band" has survived and is making a comeback against the power of the live bands and DJs. Who can forget their first experience with a big street band. Sitting on the sidewalk as kids, more aware of the growing and unexplained excitement sweeping through the crowd on Tragarite Road than of the smell left by the police horses and coconut vendor's donkeys which seemed to trouble the grown-ups. For a while they seem more interested in making sure that our sandaled feet dangling over the side of pavement into the drain are not quietly reveling in the source of the smell. Following the direction of the stare of the growingly restive crowd we look West towards St.James. And there, way in the distance is a periodic flash of what looks like a flag being waved in circles just above the horizon of this long straight road......time almost stands still, all around us life is frozen in a web of excitement and anticipation as this now thumping force materializes and draws closer in a wide line that takes up the whole width of the road and threatens to engulf us all. It is a big steelband......goose bumps! The sound of the base drums now heard in the distance for the first time enters our heart, it becomes part of us and we a part of it, and at that moment that part of our Trinidadianess is etched and sealed forever in our souls.

The picture above creates the link between the traditional soul of carnival represented by the steel drums, and the the future represented by the young player. The look of concentration on her beautiful young face will give you a hint of the commitment of these young players and how much she and the others throw into making sure that their band plays its best, even here in the tracks. After the song I spoke to her briefly just to tell her that they had sounded really good and to wish her good luck. What cannot be seen in the pic is the wonderful smile of pride that she flashed me ever so briefly. Supported by a straight direct and confident set of eyes, she made my day for me and confirmed that the future of pan was in good hands.

In the picture below is the "Flag Man", in the old days the guider, protector, and pride waver of the band, making peace as bands met or carrying the pennant in to battle.....a true character and a big part of the soul of traditional pan. See the guy in the yellow pants and white jersey? He is one of the many people that come out to the tracks to listen to pan. Not to join the party and the madness in the North Stand but to listen almost meditatively, and to be moved by good music, by good musical arrangement. Probably also to reminisce about the days of the "bad bands", the fights, the band clashes, and wars that defined steelbands and their players for a short and glorious part of their history. The names said it all - Desperados, Renegades, and Tokyo, especially in the immediate post war period when pan was at its peak, the glory of WWII was still strong in people's minds, and the whole world was only just beginning to adjust to the first thoughts that a new order might be in the making. Now he can listen and appreciate music from all bands, and in his heart he can still hold a special place for "his band" regardless of how well they may or may not be doing. 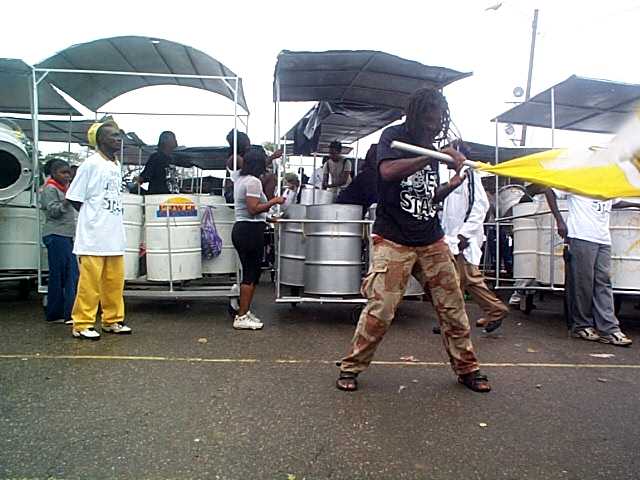 THE BEAUTY OF CARNIVAL 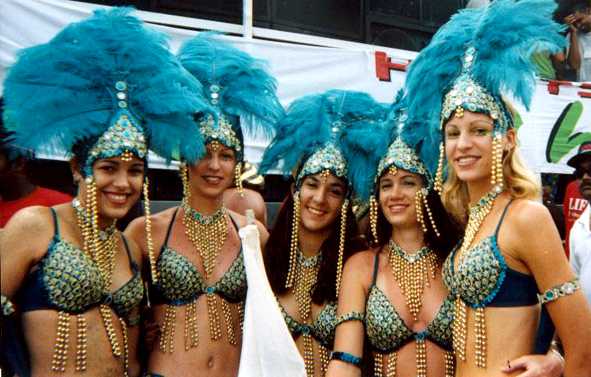 Beauty they say, springs from the soul. These lovely young ladies have the combination of both beauty in the classic sense of the word as well as beauty of the soul. Friends of our youngest son Allan, they embody all the qualities for which the Trinidad woman is known. Bright, beautiful, confident, full of rhythm, and happy, totally in charge of their surroundings. They added a welcome glow to the carnival season in their Tuesday costumes. See ya soon girls.

THE ESSENCE OF CARNIVAL 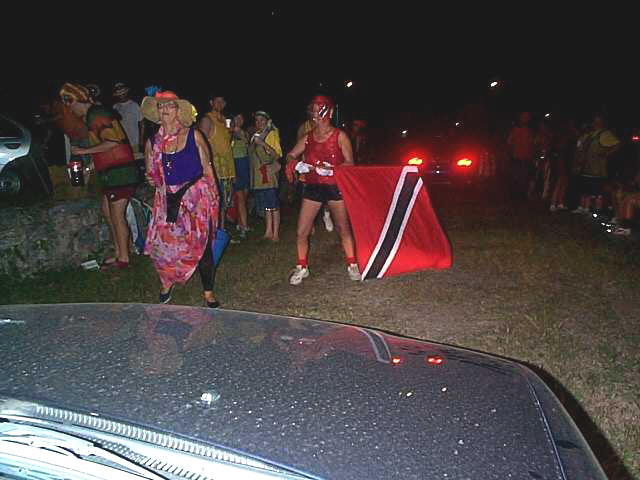 Thumbing you nose at order and social taboos, being what you cannot be the rest of the year are things that represent the essence of carnival. As soon as we arrived at Country Club for the usual Friday night costume party we were confronted by this patriotic, flag waving masquerader, who in typical carnival style "block de road", until it was clear to everybody, that while she wasn't serious, she was in charge, carnival had taken over......the rule of the Merry Monarch was about to begin!

In the picture below, J'ouvert provides a "costume of darkness", a time when you can sample the essence of Carnival and "play yourself"........be what you can't be the rest of the year without having to hide behind a social mask. These two lads are washing off their camouflage, the paint and grease that helped them to blend with the darkness. My heart bled for myself as I used hard washing detergent and a scouring pad to get the paint off of Allan and his friend Kyle, as J'ouvert was my favourite time, the time when I could again be 17 and nobody would notice. At the same time it felt good to know that the young of the next generation were enjoying the madness as much as we did, even thought their liquid intake was much lower octane than ours when we were in their position. 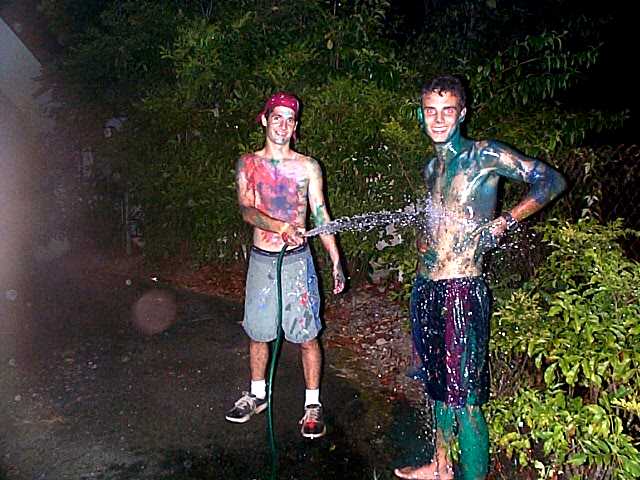 THE MIX OF CARNIVAL 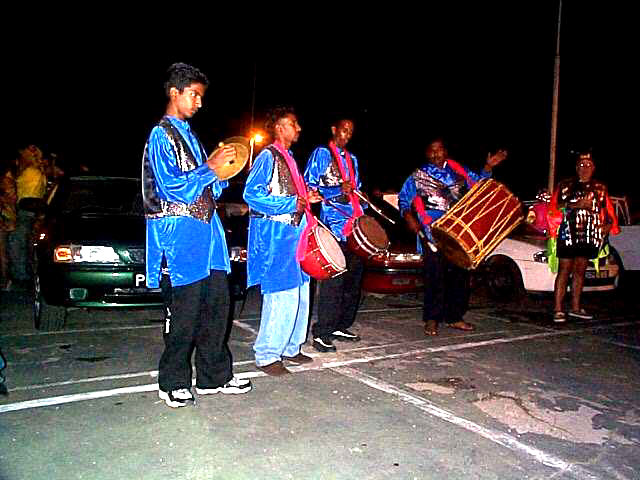 As many things in carnival are changing, so too is the mix of people and cultures that form the fete. The infusion of the infectious tassa rhythms in to carnival has brought a welcome variation to the usual range of carnival music that includes the traditional double entendre calypso, Soca, and party rhythms. Tassa normally associated with Hindu religious, and joyful events, has added an new "hand" to its traditional repertoire of wedding and occasion hands. Unique to Trinidad and called "steel pan", it also joins the more strident rhythms played during the Muslim observance of Hosay, where many groups of drummers continuously beat a single hand all in wonderful synchronization and easily heard from great distances away

The picture below captures the increasing mix of diverse cultures and classes that is facilitated by the openness and spontaneity of carnival. This foreign lady was quite at home carrying the banner of this steelband along the tracks, quite welcome to do so by all concerned. She had a lot of fun taking this short trip into our culture. I held up from using the word tourist, which implies a short term almost anthropological relationship, to describe this picture as there are now many people who come for carnival that are as much a part of "we t'ing as we are, and must be considered as Trinis from overseas. 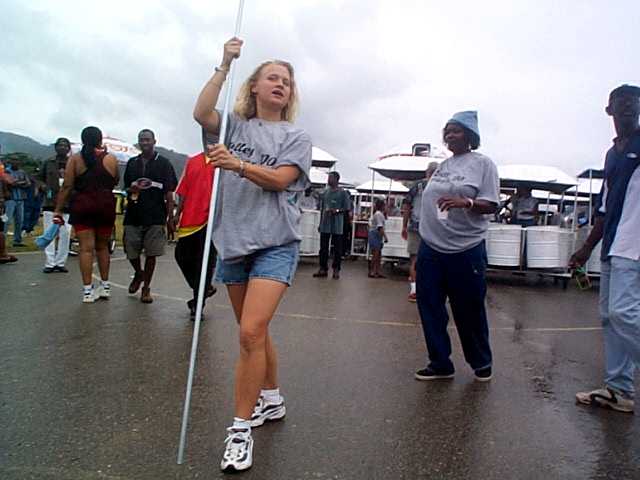 THE ORDER OF CARNIVAL 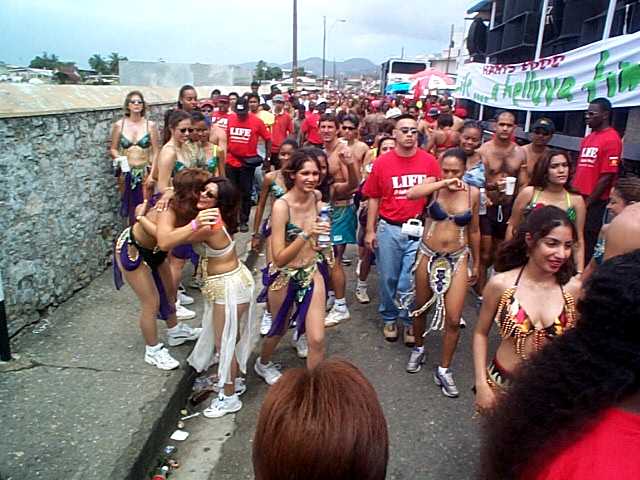 As the band leaves base and heads out for its first stop on the Savannah stage, excitement grows and the madness begins. In the middle of all of this are the red jerseys of our security detail, the men and women who work hard at keeping order so that we can play. This year they did not seem as busy as in past years, and seemed to fall back more on using guile and persuasion rather than the force that we all know that they are quite capable of. The well trained method of "swarming" discourages the most determined of combatants once formed, and creates a very narrow time-frame in which an actual fight will start......being quickly surrounded by 10 of these tough and serious guys will put sense in to most heads regardless of how much the grog has deadened good sense and judgment. Thanks guys!

In the picture below the reassuring green shirts of the Medics moved right along with us as we danced and pranced and had a great time. Had to use them once when one of our younger friends got an accidental "buss head" right on the ridge of the eyebrow. The medic was great....friendly, efficient, and got the bleeding stopped, plastered the cut, offered analgesics for pain, and plasters and gauze for cleaning up and future dressing....it was obvious that as soon as the first aid was over the dancing and prancing would start right back up as if nothing had happened, and these extras may be needed. 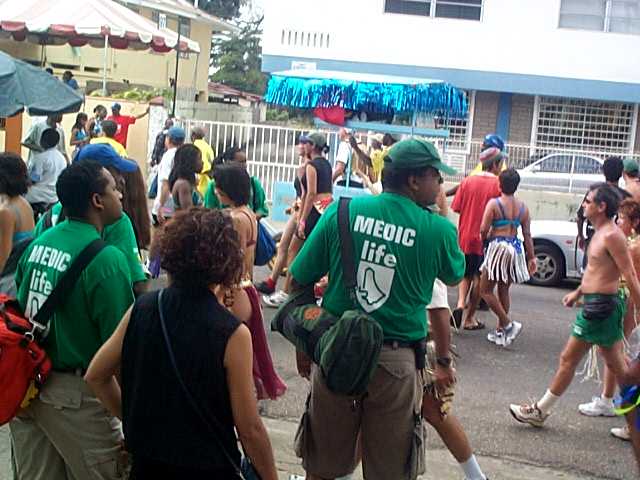 THE MADNESS THAT IS CARNIVAL 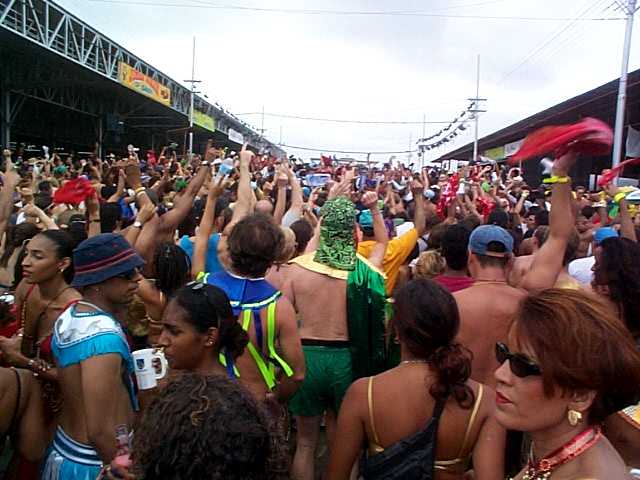 This is really what the madness is all about, the "Big Stage" on the Savannah. Complain and grumble all they want about delays and dust, the excitement really peaks among the costumed players as we approach the stage and the DJs start calling us in to sections. Taken on Monday, the less costumed and wilder of the two days, this shot shows the wide diversity of people that play carnival, and how well we get in to sections (hmmmm, obedient lot). On command from the DJ or live band to "put yuh han' in de air", or "get somet'ing and wave" the crown responds with immediate fervour....the music the people and the surrounding are all one at last. The Merry Monarch is fully in-charge!

Seen in the pic below, we have just left the stage exhausted, and with a much reduced pace we hit the open road around the Western Savannah, we all start to wind down, some walk, some enjoy the ability to "jump" freely at last without having to run to keep-up as the band races towards the stage to get a good place. Others break for a drink or snack, some meet friends and family.......it is a great part of the route. Many go and look for the nearest home, apartment, or tree to get rid of the liquids accumulated thus far. We visit our friends and neighbours from San Fernando, the Mahadeo's in their PoS apartment from which this shot was taken. Good for a cold drink, some lovely snacks and of course some "nose powdering". 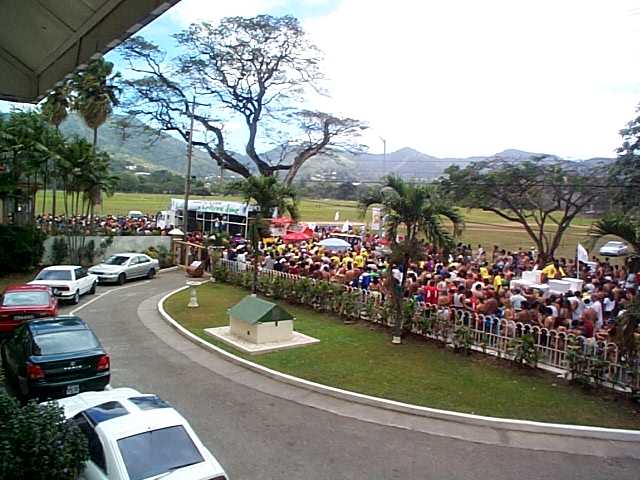