BRIGHTON SCENES.
A place of memories, a place of sadness.

These pages are dedicated in fond tribute to a great bunch of people who we loved back then and miss to this day - the Brownes, Van Den Burgs, Goldings, O'Connors, Merrys, Cambridges, Yearwoods, Marc and Odette de Vereuil, de Verteuils, Crowdaces, Josas, Augustuses, Selliers, Millars, Eddy Milne, Wiltshires, Kunkles, Father Mendes, Akeila (Mr.Dodderidge from KTO), Hamiltons, Mr.Worsley, Wilsons, Logies, Mr. Augustus Long, Lyders, Kennys, Borehams, Murphys, O'Connors, Mac Leans, de Boehmlers, Le Moines, Winston Ojo, Mr.White, Sprigidy, our sister and friend Lillian, Millionaire, the Bachelors especially Malcolm Brown who taught us to swim and dive, Willy Reece and the guys in the Club and the golf course, Taylor, the oyster man from Rousillac, and many many more.....too hard to see the screen now. How could I forget Peter "The Bull" Ellis, the toothpick chomping hero of all the boys at Brighton. It was rumoured that he could recognize and name the brand of any toothpick without seeing the packet, just by putting it in his mouth.....we thought that he wasgreat.

Putting these three Brighton pages together has been one of the hardest things I have had to do for a while. Because of the age we were when we lived there, the memories are of the security icons such as the people (grown-ups), our homes or sanctuaries, and the the roads that joined them. The open frontier areas like the bush, the Pitch Lake, the golf course, the sea, Coon's Town, The Flavian cinema, were the first places that we were able to test our freedom away from our parents, to do things alone, face some challenges as boys together for the fist time....no adults....sure that we were safe and equally sure that home and the grown-ups would be there when we needed them, that the roads that would lead us back had not changed and would not lead us somewhere else.

The sounds (howler telephones, the tramway, steam rig, and pumping jacks), and smells (boiling pitch, hydrogen sulphide, and the sea) are powerful stimulators of memories, but unfortunately I haven't yet found out how to get these senses on the page......drat!

This first page has pictures of some of the scenes that provided my bearings through those lovely times, they represent a road map to a young man's first adventures with independence.......hope that you enjoy them.

The second and third Brighton pages are a sad collection of what were once happy homes where the sounds of laughter, and music such as - Cherry Pink and Apple Blossom White, Scopy Ann, and Patricia would drift out of when the grown-ups had their daytime parties that seemed to go on for the whole day and invariably end up in the club. You can get to the first one at the bottom of this page, and the next from that. 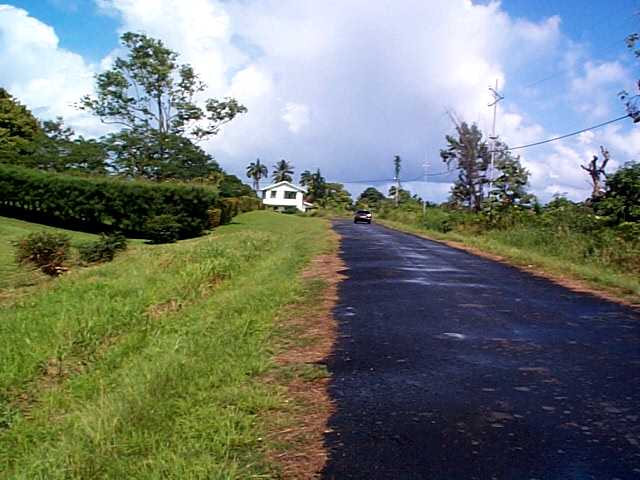 Coming in from the gate looking towards the Texaco Manager's house straight ahead. The tee box over the awful pond would have been at the pictures edge on the right and Lake House on the left. 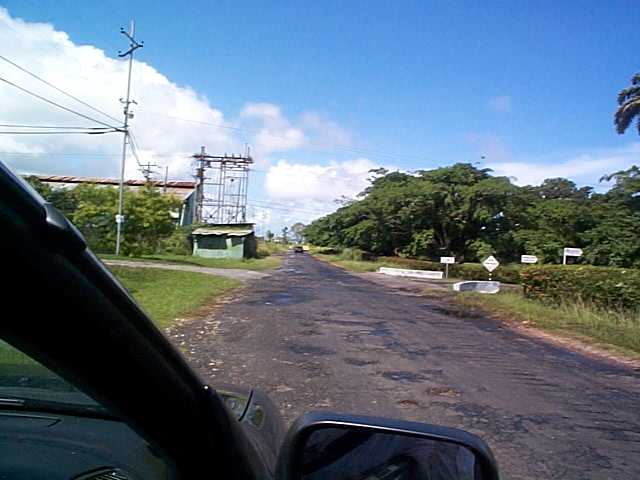 Around the corner we turn left towards where the overhead cable tram crossed the road and the refinery hummed tunelessly in the background......all gone now thanks to man's ambitious plans. To the right is the road down to the bungalows. On the left out of the picture would have been Lake House. 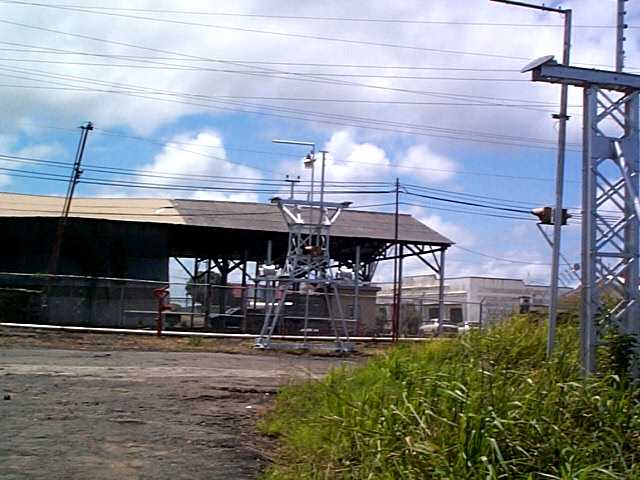 The last remaining tramway (Brighton Buckets) support derrick......it stands there as a grim reminder that memories and the importance of what they stand for are yours only. When we first moved to Brighton and I was grappling with homesickness for San Fernando, the sound of the tramway which ran just outside of my window was one of the first comforting sounds that helped tie me to this wonderful place. The howler telephones, hooting loudly in the dead of night announced that men, live people, were around and we were safe. 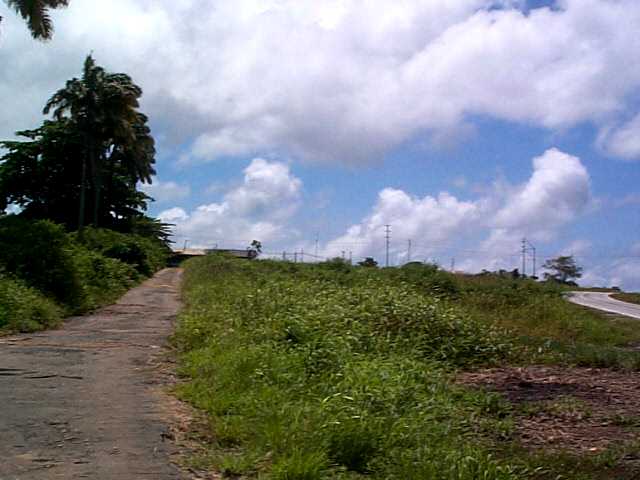 Once the road that lead down to the main offices and the jetty, and ran parallel to the tramway, now stands sadly as the bush creeps in from both sides......what stories that rough pitch surface could tell if only it could talk. 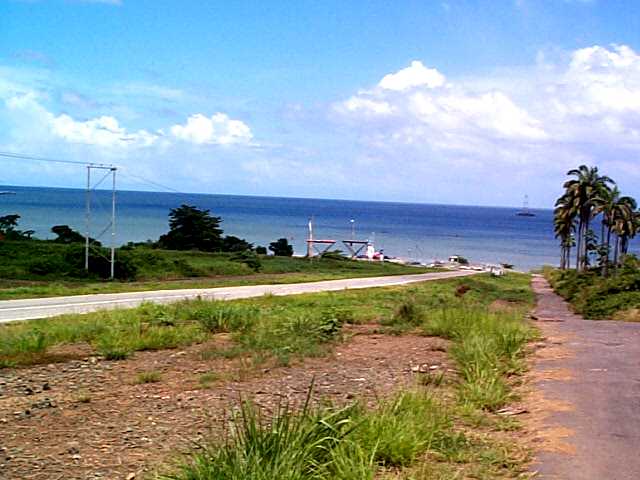 Where is the Main Office, where is the tramway and the jetty....maybe this isn't Brighton, but wait....there's Platform 1 and the Royal Palms......is this a dream?? 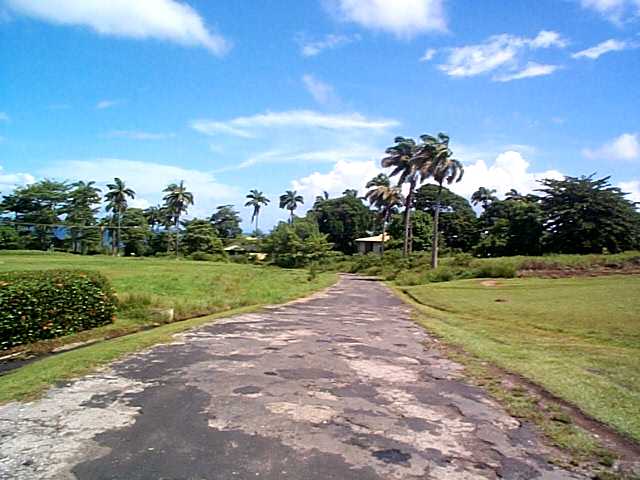 Here we have turned right and are driving down towards what was the club and mess and some of the bungalows......directly ahead is the bungalow that I knew the Yearwoods and the de Verteuils to live in, and just to the left of it the Golding's, and to the left of that the playground. No way to explain my feelings at this one except to commit my though to verse.

Click below on BRIGHTON.htm to read a poem written after one very sad visit immediately after the rape of Brighton had started in earnest.