All the pictures below have been kindly sent in by Allan Foskett...thanks much Allan. 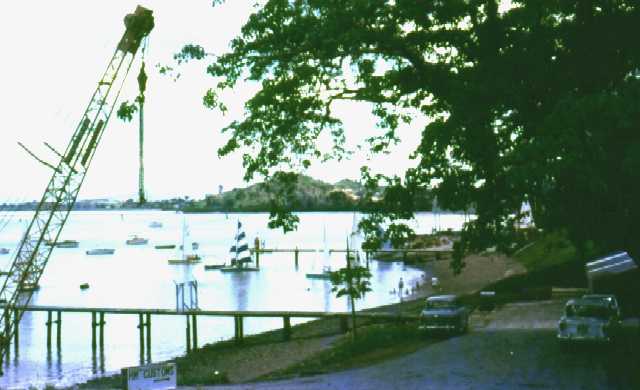 What a lovely shot that embodies old PaP and the wonder of the time as represented by the sailing boats, the sea, the bathing jetty, the yacht club, and most revealing of all the little sign that says "HM Customs". The beginning of change is represented by the stark steel framework of the crane boom hovering industriously over our dreams and memories. The iron gate on the bathing jetty reveals that the old is about to leave and in with a new order, a time of industry and efficiency that has trampled much of the old niceness and graciousness of the time. Thanks to Allan Foskett who sent in this and all the other pictures on this page. Allan obviously has a good sense of what represents the memories of so many of us.....thanks Allan.

The first thing that struck me in this wonderful scene of PaP taken from the old La Carriere side looking East, was that the tanks looked so shiny and important. Such stark contrast to the rusting and unhappy looking hulks that stand empty of oil and meaning except to those of us who can look back and remember scenes like this one. I was also happy to see the Power Station "B", known commonly as "B Station". At the time that I left Texaco to take up work with Neal and Massy in November 1970, I was working as a Shift Engineer in "B" Station and this pic invokes really good memories of people like Laurence Hawkins who was the MRD, Al Nunes, Bill Hawton, Rod Clarke, Ben Rajkumar, and Leslie Edmonds, Felix Sammy, Arthur Mantle, Mr.Cheesman, Redvers Hume, Learie Telesford, and many others. I remember the Power Station clerk Soloman, and my shift of Peters, Davis Chadband, Harold Byragee, and old Sardine (Portugese pronounce it Sardina) the switch-board attendant. I learned a lot from that period of my life, not only about the technical and operational things, but about people and how to manage them....both the good and the bad, and the thing that joins the people above is that I worked under them, and was the beneficiary of good, fair, and open management.......a rare commodity these days. 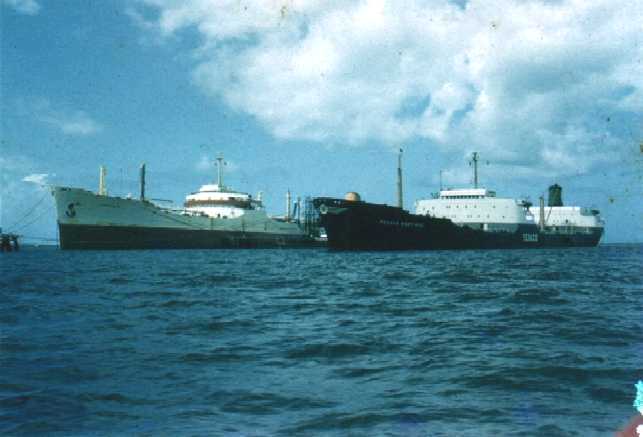 Safely braced alongside what was probably No 6 Berth, these two tankers would have been in the "Super Tanker" class, and based on general superstructure design, the Texaco tanker would have been new. Tried everything that I could to confirm that its name was the Texaco Trinidad. Ships have always been a part of my life and I can close my eyes now and remember the special smell that ships have, and the constant low, almost imperceptible hum that is always present. I remember the TT Vestfold, the ship that we went on long leave on. It was the first time that I had set eyes on Britain and in a short moment sealed forever the bond between myself and that Green and Friendly land........Wales was on the left or Port side as we sailed up the Bristol Channel, and England spread out splendidly on the right. I remember Cap't Volstadt, Arne Whalrus (??spelling - meant rough whale anyhow), Erik Olsen, Bjarne Thomason, Arvid Halvorsen, Charles the bos'un, and many others who allowed me to be a little man for a short while. The ship and most of the people on board were from Sandje Fjiord (spelling)....Tussen Tak guys.

Another great tanker shot taken in the PaP harbour....this time we know the name of the vessel......the Texaco Caribbean......super ship, remember her well. 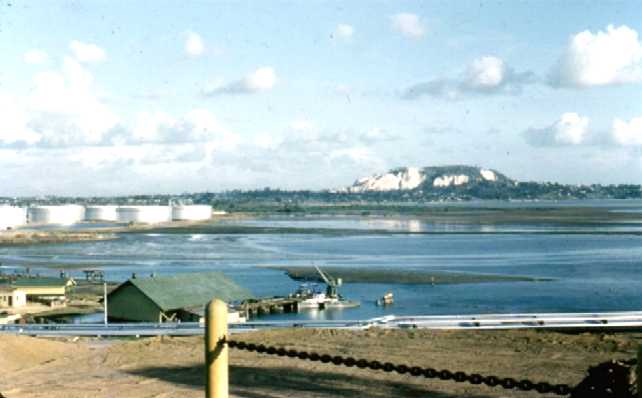 A great view of the Pile Yard and the beginning of the main jetty. San Fernando hill is still being quarried at this time and already showing the scars of greed. Where I now live (Just above San Fernando yacht club) was still bush and known as "Tractor", the San Fernando hospital was already built and its vague outline can be seen at the top of the bush-line at the extreme right of the pic. 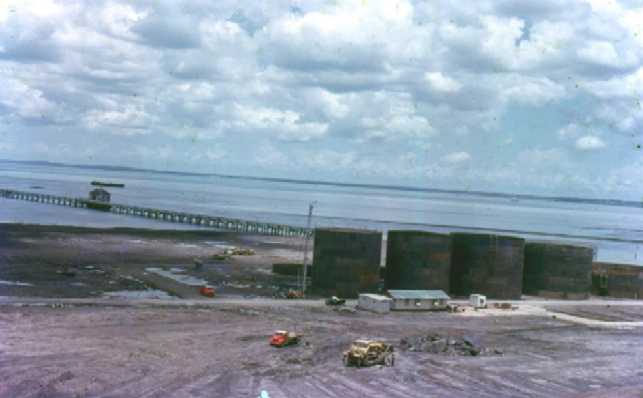 Two pictures of the conversion of the Foreshore to the Lube Oil blend plant, shipping office and the Lube oil jetty itself. In the bottom pic which is reversed unfortunately, the old salt water pump house which supplied cooling water to Power Station "B" can be seen just off to the mid left of this pic. Just out of the picture was "Bent 80", a manifold used to select routings for oil being pumped to and from the various berths. One of the first jobs I ever had to do when I joined Malcolm Brown at Underwater Contractors, and Thor Overland might remember this, was the chipping and wire brushing of all the clamps on the jetty up to Bent 80. These clamps connected the metal braces and cross-braces to the concrete piles and deteriorated in the severe salt air, especially in the tidal or splash zone. We had to to chip and clean every single one, paint it with first Foscote, then a red primer, and finally a gooey thick black bitumen based paint.....what an awful job.......but I was young, brash and brave and took its successful completion as a challenge that I had to beat......nothing was more important. Tremendous discipline builder, especially on Friday evening when I knew that the troops were gathering at the club, and I was still hanging upside down painting clamps and spitting paint.......better person today because of it however.