There was a certain level of quietness and decency during the day while the drinking progressed. At night however it all came together....the cloak of darkness and the liquor finally "hit de head". And so it was twice while Donna and I were there. 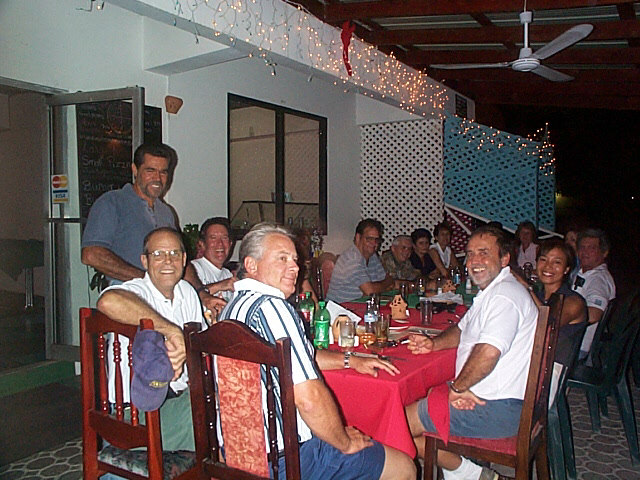 Night 1 - Remember the picture on the "Daytime" page where the reunionist were caught opening the batting at the Crown Point Hotel bar.......well this is quite a bit later and the same innings. By now you will know everybody except Randall Rostant who sits on Chris Taylor's left at the head of the table. Randall lives and works in Tobago. Not visible in this picture is the 40oz bottle of Black Label rum that disappeared in less time than it took for the soup to get to the table......man! I ain't never seen anything like it....a 40 oz!!

This picture and the one following are named "Here we are sitting in an Indian restaurant eating Italian food in Tobago." 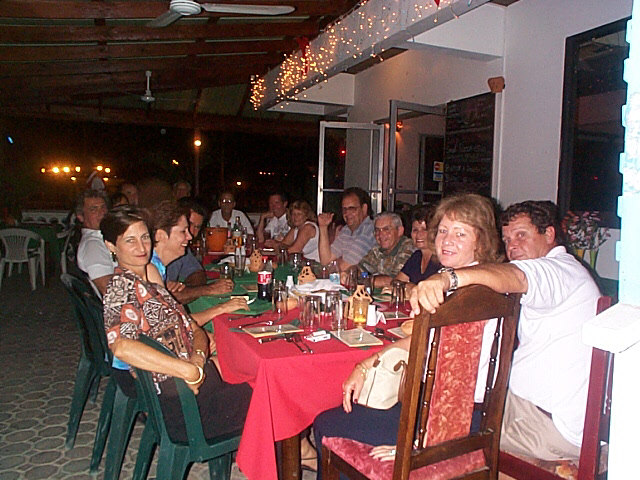 Here we are at the other end of the table....what a happy group....want to know why.......look at the near empty 40oz at the other end of the table. The food was either very good or awful with a preponderance to the latter, and the service .....hmmmmm ....could be called dis-service very easily......but in our frame of mind it didn't matter one bit....we trundled along enjoying ourselves.....we were even able to joke and laugh at Joan's beef popsicle....she took it well too. Talk about a steak done rare. 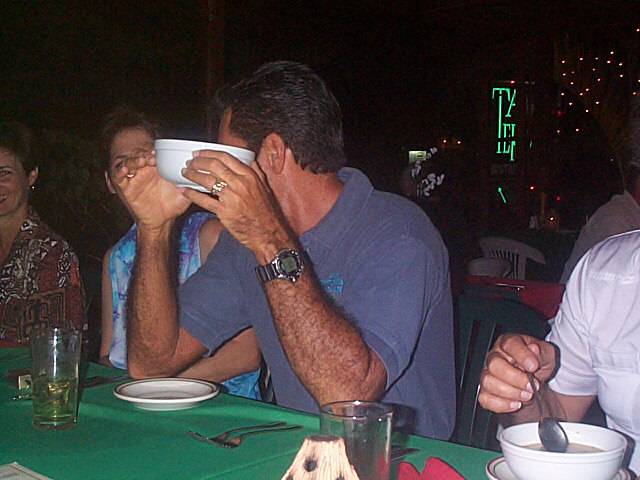 Not quite sure how this got started....it was either because the soup was laced with pepper, or simply that Pete didn't get a spoon with his soup.....chugged it down in fine form anyhow, and then next day went on to reassure us that according to the rules of etiquette (Hughes' book), once certain niceties are met that it is OK to pick up your soup bowl and "lick dong de damn soup." Just look at the glass in front of him......that ain't ginger ale! By contrast Dus Bayne gently dips his soup out...not sure if he should join Peter or not......"looks like fun" he thinks to himself. 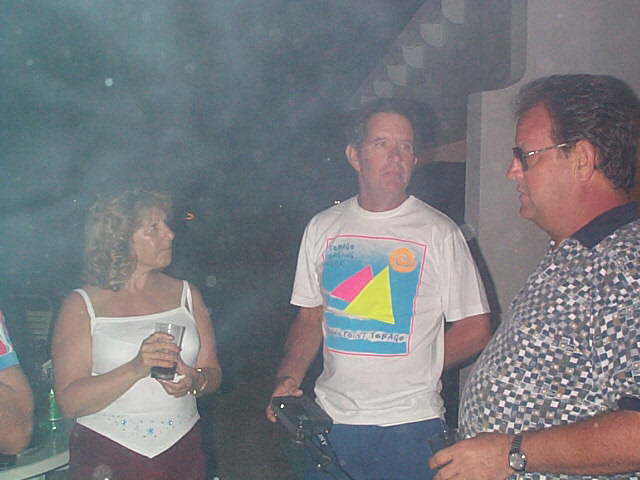 Night 2 - We told Des, Chris, Frances and Sandra not to sit together when smoking......jeeeeze what a cloud. Just kidding....that ain't smoke...it is a visualization of the sweet and tempting aroma wafting out of Alec's BBQ. 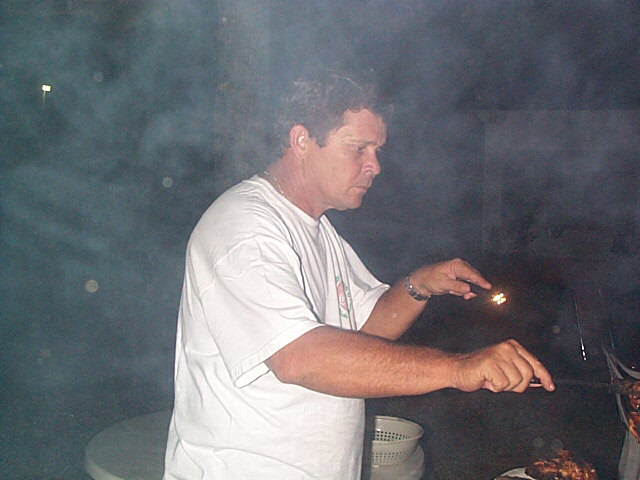 The Maestro himself....what flair! what artistry! what concentration! Complete with his little "BBQ light", a special tool that can't be used for anything else.....self cleaning anti-grease lens, Freddy takes a raw piece of chicken and turns it into a gourmet delight, a work of art, one btu at a time. Don't eat meat myself but the oooohs, aaaaahs, and slurps, heard clearly all around the compound, announced that the food was great...cheers Freddy.

Not to long before, this was a healthy happy collection of well fed and shiny bottles of various tasty liquids. Hungry sucking and gulping of their contents has left them mere shadows of their old self. The energy that was once contained within these sad specimens has now been transferred to the new hosts who have taken on a warm and congenial flush and are talking and laughing more than before. This transfer of fortunes represents one of the more important natural cycles of tropical life.....getting bombed!!!