Old Brighton - Happy Days.
So long ago, but just like yesterday.

Thanks to Odile De Verteuil for taking the time and having the patience to get these wonderful pictures sent to me. She tried electronically a few times and then finally gave in and sent the hard copies by post. Opening the envelope was like entering a time machine and setting the dial for those happy old Brighton days. Thanks Odile, we were few in number but what we shared will always be important and always remembered. 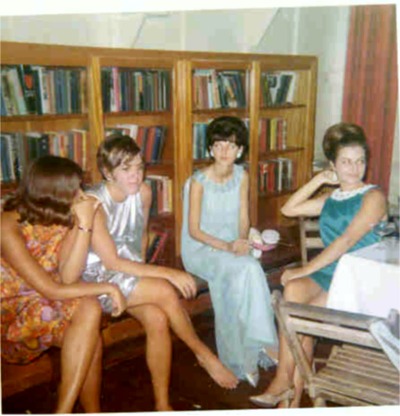 In this relatively recent picture at left, taken at a time when colour photography had just come in, the beautiful young ladies of Brighton sit in the library of the club all dressed up for a party.

From left my sister Gillian, sister Jennifer, Dutch friend Maike and Marijke Van Den Burg. Marijke's dad Henk or Dutchy as he was most popularly known, was the manager of Van Leer, the factory at Brighton that made steel drums for Lake Asphalt Co. and later for Texaco. The Van Den Burgs are among the people of the time that I hold very dearly to my heart. I remember them, cherish the memories of the great part that they played in my early life and miss them today as I did when we left Brighton many years ago. 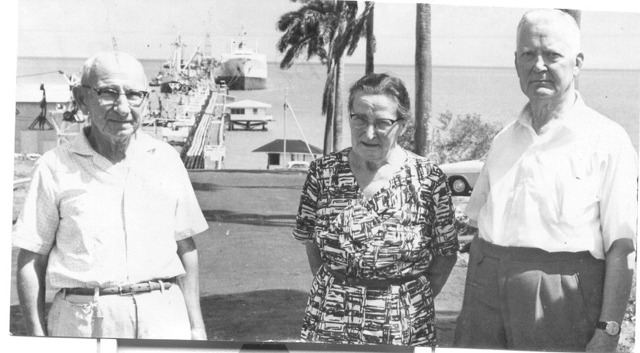 Uncle Mark de Verteuil stands outside the Brighton Main Office talking to two friends from away. Uncle Mark and Auntie Odette, where two of the people that we children loved without reservation. I remember Aunt Odette's rubber spider Griselda, and all the pranks that she played on everyone. I remember Uncle Mark's knowing little smile whenever someone told him about the latest prank. Never heard him comment, stayed absolutely neutral but we were not fooled......we were always sure that he enjoyed the results of the pranks and looked forward to the next one as much as we all did. To me this pic represents a big big part of what I remember of Brighton, the tramway or Brighton buckets.......I can hear them clicking past our window in the house we first lived in. In the first few nights they helped create a sense of place, a feeling of security in knowing that people were around at work loading and unloading them....important for a newly arrived "Town/city boy". I can see the Customs House, Security Shed, a ship loading asphalt and reckon that it is not one of our favourites the Orange Nassau or Orange Staadt since it has a light coloured hull and looks quite a bit bigger. The pipe rack that ran alongside the wooden walkway and carried oil out to the ships that berthed alongside the "extension". The old Venezuelan tanker Jobouri (spelling??) that used to bring oil from Tucupita in Venezuela for the refinery. They came in down the river Orinoco. It was flat bottomed and shallow draft in order to cross the sand bars. I remember that the pelicans used to sit on the tramway cables when not in use and one time as we all walked past on our way to a shipboard party, all freshly bathed and dressed to the "T", they all launched off, unloading their last meals all over us......ever smelled pelican "poo"....the ships captain welcomed us aboard graciously and as I remember handled the situation well. As usual we got loads of chocolates (Van Huton (spelling??) and apples. 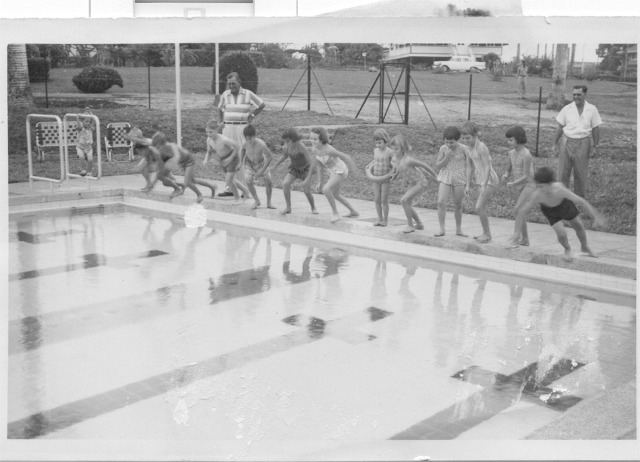 What a wonderful old picture, one full of great memories for me. John Carr at left with hands on his hips and my Dad in long pants smiling watch the kids take their first plunge in to the newly opened Brighton pool. Long time ago but I will try my best to identify the kids. From left: (Blond hair) Yours Truly, (dark hair) ??, Sean O'Connor, Floyd Hamilton, Michael Merry, Patricia Josa, Jennifer Golding, Anne Josa, Helen Josa, Gillian Darwent, Jennifer Darwent, Jean Merry, Peter Merry. David Josa?? In the back ground is the O'Connors Lake Asphalt house where Sean lived, where Uncle Gerald helped us build our first gang house under a mango tree, where we had our rocket making lab. Where we could go and smell the real Christmas trees that they got every year from Alcoa. We eventually lived there much later in the days of Brighton II for the Darwents. Don't recognize the car parked out front. The Lake Asphalt Manager's House peeps out from the top right corner in this pic. It was where Howard Andrews lived at the time. He had a battery powered Austin car with a horn and headlights.....he was the envy of us all, and probably the reason why we put bird peppers in our mouths, chewed around looking as though we were chewing the peppers and uttering great sounds of satisfaction. Howard was fooled and popped a few in to his mouth and chewed down on them.......Wow!...what a reaction.....it burnt the inside of his mouth and as he wiped the drool away from his mouth , or it fell on to his chest it spread the pepper which burned his soft un-Brightoned skin just as badly as it did his mouth. We were all in big trouble!! 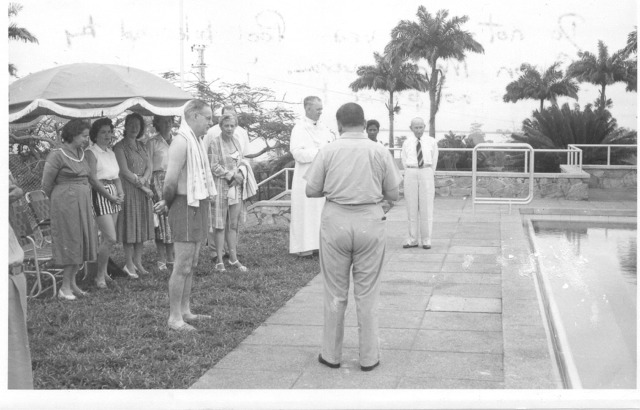 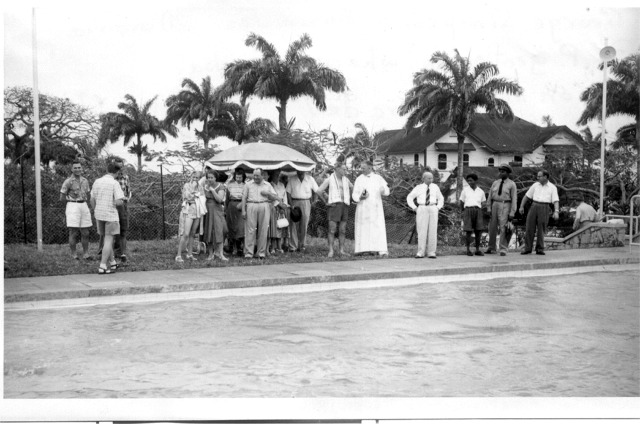 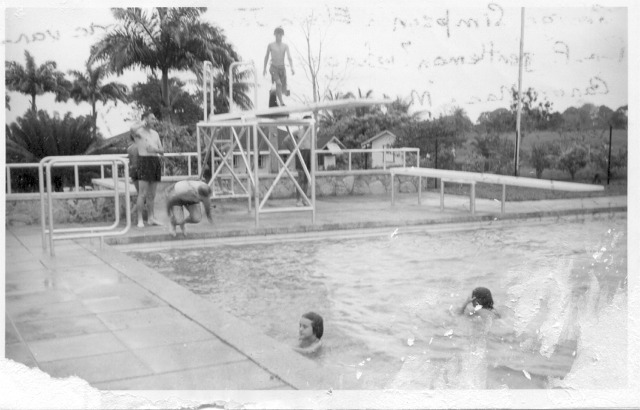 In the pic at left the pool is now in full use, everyone doing their own thing. Can't make out anyone....Jean Merry in the pool perhaps, but an important pic for me because I can see our favourite old Brighton home in the background. As I sit here today putting this together, it is 6.00am and the rain is falling outside , it is dark as we wait the arrival of tropical storm Earl and it invokes memories of the rain falling at Brighton, the shutters down, the house dark, the melody of the falling rain soothing us in to an almost hypnotic state, the blue lights in the high ceilings turned on and what a wonderful safe feeling it was. Even though we couldn't go outside to play, we were happy to be indoors and always found all sorts of adventures inside. It was here that Mrs. Sturn's ghost visited me one night, where we had our rig in the mango tree, where we kept two chickens, Becky and ??, where Lassie from Coon's Town killed my rabbit and was immediately forgiven, where I shot and killed a sparrow with my new bow and arrow, where I got blown across the kitchen floor while lighting the oven for Mum, where I got a bad cut on my finger while trying to open the Borden tube on a pressure gauge with a hammer, shot Gillian in the elbow, my first aquarium full of fish from the golf course, pink bathroom with high ceilings and a skylight in the roof, and much much more, too much to record. Alas the house is all gone, it burned down and the empty lot all ploughed up and rough is all that is left. When I die the importance of these memories die with me, there will be no tangible markers of that time left, they will all have been ploughed under by man's ambitious plans.

In the pic below we have a clearer view of the old home and way in the background can see the Sobo Jetty, where Emmanuel Lee drowned while swimming ashore from the launch that he had just moored. My first dead body. 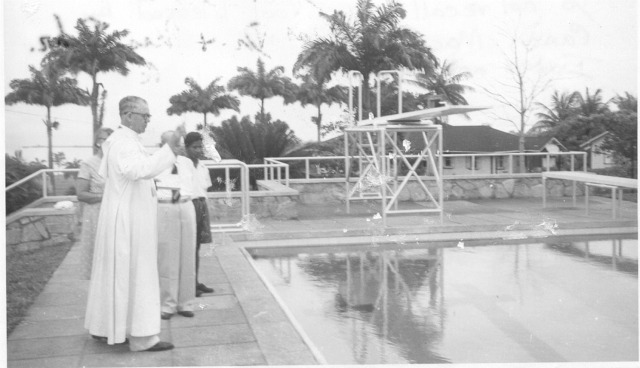