What a place to start, the old PaP club in La Carriere. I have vague recollections of it being near the gasoline bond and of it burning down. More clearly though are the memories of the squash court that still stands but unused, and can be see in the pic in the lower left corner. Turn right at the junction after this pic up the winding road that went up past a WWII bunker, a bachelor's house (chickens in a triangular shaped pen...Alan Carty??), up past the local office, round the tight climbing corner past the shipping office, past the big offices and naval gun emplacement sites, the geological office/lab and Ajax road leading to the bathing jetty and Yacht Club. In the junction after this pic were some bungalows, I remember the Pontifex family living there. Instead of turning right at the junction you could go straight past the grocery that pre-dated Hi Lo and where Mike Merry used to go and "lift' our daily supply of fags. On straight over the little railway line round a little cliff past the main jetty on the left, on to the cargo jetty and foreshore below the hill on which all the offices and gun emplacements stood. Long time ago but seems just like yesterday thanks to Richard. If you look closely you will see a picture of a girl walking in the junction outside the club...who was she...what was she thinking about. 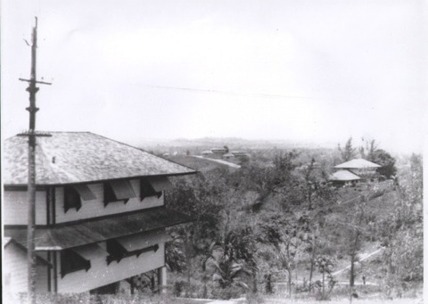 This shot has me licked but may be Lime Avenue looking down on Bay Avenue and Samaan/Tamarind in the distance.....presuming of course that the hill in the distance is not San Fernando hill. Super pic anyhow, speaks loudly about the peace and serenity of the time......the quality of life. 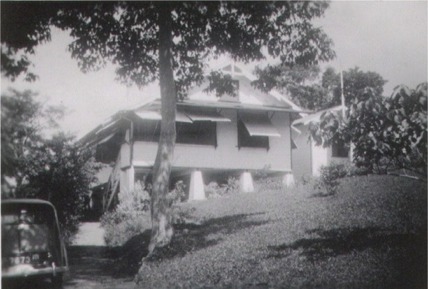 I'm really trying to be tight on space by keeping the pics small and few, but the old car in this shot and the general composition gave me cause to wipe my eyes......almost like being there again. Hope that you enjoy it also. Thanks Richard you have really picked out some super pics that really reflect what this site is all about. 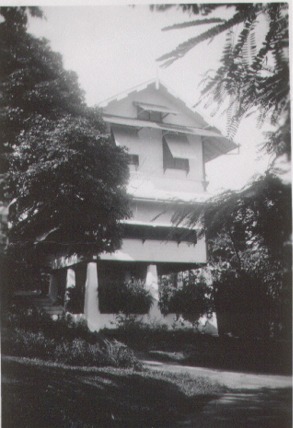 The two story bungalow above with the little open space below invokes many memories of us kids liming downstairs. We used to get away with an amazing bunch of stuff out in the open like that.....sort of like a private bus shelter. Just take note of the big ferns.

What story about PaP places would be complete without a picture of the little Anglican Church. In this picture, taken before it was expanded on design by Mickey Bailey there is very little evidence of refinery in the background.......must be pretty old.